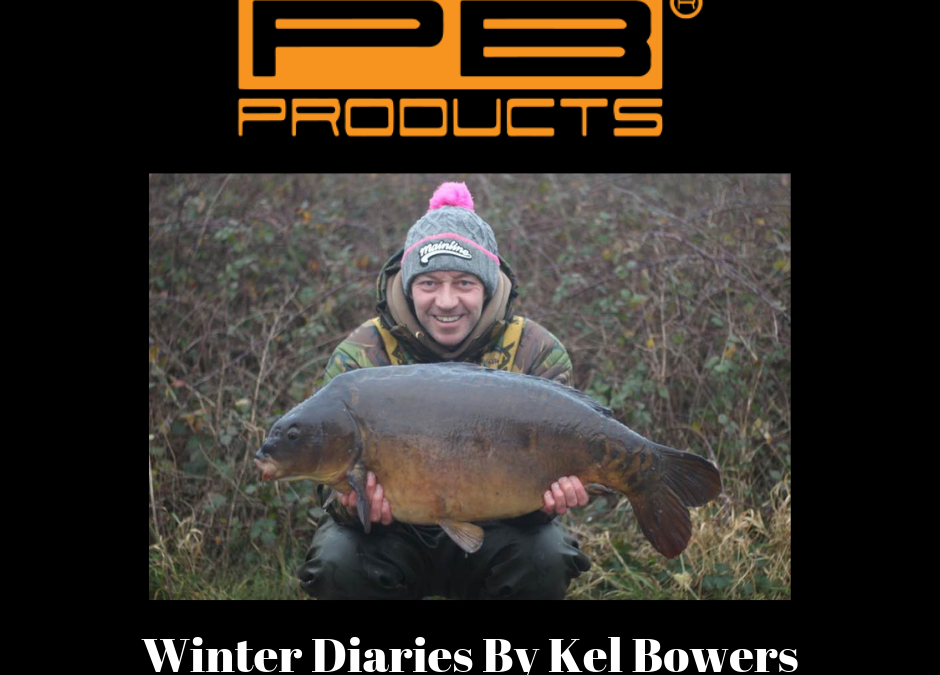 Late December took me onto a lincolnshire pit I’ve been baiting for a couple of months at the back end of autumn.keeping an eye out to anyone else fishing and recording any captures but most of all tracking bite time.Time of year and family requirements day sessions were the call,It was all about getting there early morning in winter darkness and then getting back to do school run at 3pm daily combining with the wife  Sarah who was doing morning school run on her way to work enabling my success to unfold.

I turned up at the lake on my first session Monday morning to an empty lake,how pleasing,my thoughts if fish are feeding they should be on they’re baited area. Gear out the van the rods  were soon on the spot,each rod baited with approx 1/4 kilo of cell boilie and 1/4 kilo hemp and snail.pb Ronnie rigs size 4 curved kd hook complimented with the new 45lb shield boom pinned with the tungsten putty, one loaded with a yellow 12 mm pop up the second with a white 15mm pop up and the third  with a 15mm pink pop up.10 am first indication the rod was off a lovely starburst mirror was in the net wow!what a start to a winter campaign and what a fish going 24-7.At 1pm a single beep and a scraper 20 dark coloured common nestled in the net ,2pm soon arrived with not another beep off I went thinking of my next morning return .arrived back at the lake the next morning same aspects applied we were fishing again 10c south westerly moderate wind it’s feeling good. kettles on and were getting fixed in.2 single bleeps on left rod bobbins tight  to the blank,I lifted into a fish that felt quite heavy after a 5 minute sluggish battle she graced the net the rod was  back on the spot ,she spun the scales to 25lb great start pics done and slid back ,within minutes same rod was away again this time resulting in a lovely 26-12 common.rod back out again and more bait applied couple more brews went by then the right hand rod melted into action after a mad scrap weeding me up twice but never In doubt i could persuade it to move using the ever consistent PB control Mainline18 lb coupled with the power of the PB 13 ft 3.5 lb TC royal class rod,I slipped the net under a stunning common of 27lb single black scale.i returned the following day with no action after a very cold night and cold day.more bait applied on the spot and home. 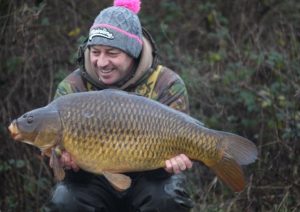 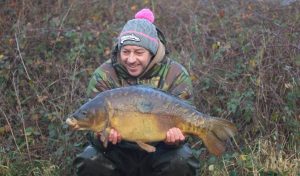 I felt I could change something!
The next day I returned at first light l had a run after an hour which resulted in a dark scraper 20 common with no other action all day rebaited the spot and left for home. 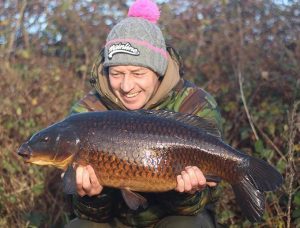 My return on Friday was the change!rods back out there but this time I’d changed one rod onto a 20 mm vibrant pop up the thinking to this was that any passing or backing off fish would find it hard to resist the size and colour of bait,sure enough it was away and in the net  this fish was special two tone dark as ur hat with orange undertone going 21-10.again rebaited the rod to the spot with a special one popped up it had only been in 5 minutes and the same rod rattled of again these special ones were nailing em,a good old scrap and some lunging under the rod tip putting the pb royal class through its paces which was superb throughout she was in the net., 27 lb Lemmon winter common wow! 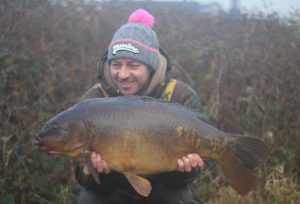 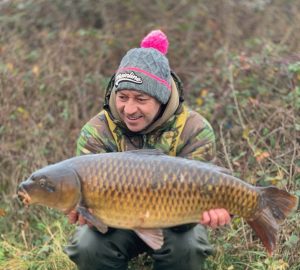 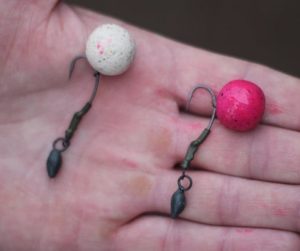 A short trip back to the lake Boxing Day afternoon walking off the turkey and mince pies with the family and dog I applied 3kg of chopped cell boilie and 3kg of hemp on the spot via a boat and outboard believe me the spot was gleaming!sometimes doing this not only keeps the spot rocking but also keeps u at rest waiting the return!Family commitments would hinder this until the new year but I did manage to get some new Ronnies tied on the odd evening in between family party’s 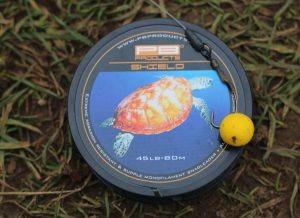 January 7th saw me return to my unfinished business once again early starts dark mornings back on afternoon school runs game on!Rods were put on the spot this time only fishing two rods there had been two anglers on the other side of the lake for 10 days over Xmas resulting in 9 bream could the prebaiting be holding em up?mid morning the left rod was away a good old fight resulted in a gnarly old bullnose common going 27 on the nose,other rod was away within minutes there on-it! I lifted into this fish it felt big did me all ends up until it graced the cord wow!I swear if I’d lost this fish I would of said it was very big but there was no way that curved kd was going anywhere ,there u go,she spun the scales to bang on 23 very distinctive thick wristed mirror with a single black scale and a fresh scar which was treated before returning.Two more scraper 20s graced the net weighed and pics,it was time to go again another 2kg bait on the spot I’m back on school run!
Returning the next day was very quiet with no success my thoughts whilst travelling are the fish now feeding an hour later with the nights pulling out a little?The next day I had leeway until 4 pm daughter was singing after school great chance to investigate,I’ve had no indications all day it’s 2.30 pm bite time as been 10am-1pm and it rattles off a peach of a mirror going 23-12 buzzing. 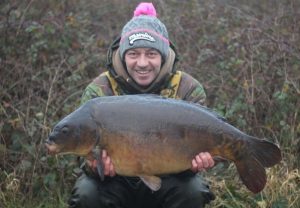 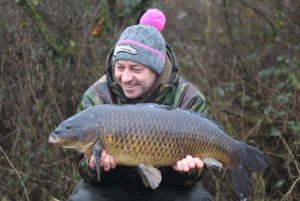 I returned on my last day of my working holidays absolutely buzzing to be able to fish until 5pm.10.30 am I was in an heavy fish not doing much until under the rod tip it went mental but was soon tamed on the pb products 13ft 3.5lbtc royal class rod 18 lb pb control reel line, slipped into the weigh sling she went 26 on the nose a pristine dark brown mirror vertually a leather.rod back out rebaited just clipping the bobbin on right hand rod was away picked up into a very feisty fish an epic battle resulted in a 26-14 mirror parrot face,The afternoon flew by, it felt late I checked it was 3pm.another hour passed nothing and then I had a Kerry Katona (one toner) lifting into what felt like a unit of a fish i managed to turn it and got it coming but it felt angry an epic ten minute battle finally came to an end as she graced the cord excited to look in the net there it was finally a thirty dark deep big brown mirror settling the scales at 32-4 (That extra hour) pbproducts never let u down! 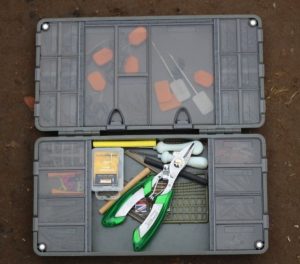